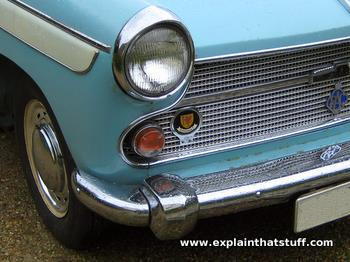 Nothing sparkles quite like chrome! If you have to get a vintage Pontiac looking great for the streets of Havana, you'll know one of the secrets is to buff up the chrome "trim"—the fenders, headlamps, door handles, and radiator grille—so they really gleam in the sun. Car makers love relatively inexpensive chromium-plated parts because they shine like silver, making vehicles that sell for thousands look like a million dollars!

It's ironic that we think of chromium as shiny, silvery, and essentially colorless; Louis Vauquelin (1763–1829), the French chemist who discovered it in 1797, chose the name from chromos, the Greek word for color, noting the many brightly colored compounds that chromium formed. Let's find out more about this intriguing element!

Photo: It's the chromium-plating that makes old cars like this Austin Cambridge look really special. Unfortunately, with time, chrome plate degrades through "pitting", a kind of corrosion that leaves the surface covered in tiny spots, flakes, and even holes. You can get chrome replated, but it's expensive. 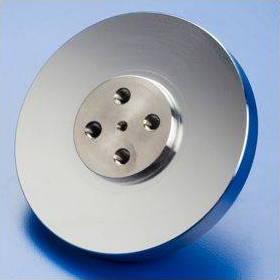 Where and how is chromium produced? 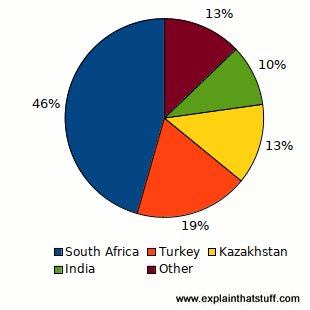 Chart: Worldwide chromium mining figures for 2018. Between them, Kazakhstan and South Africa have roughly 80 percent of the world's chromium reserves though, as you can see here, they currently mine a smaller proportion of the chromium we actually use. Source: US Geological Survey: Minerals Commodity Summaries: Chromium: February 2019.

Chromium reacts readily with oxygen so we never find it in Earth's crust in its pure metal state. Most commercial chromium comes from chromium

According to the US Geological Survey (USGS), major exporters of chromium to the United States include South Africa, Kazakhstan, and Russia. Russia produces most of its chromium electrolytically (by 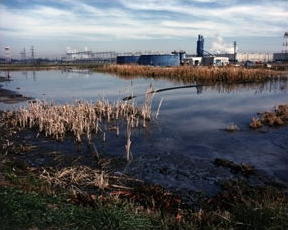 Photo: Chrome cleanup: Chromium isn't always shiny and nice to look at. This toxic lagoon of chromium sludge at Portsmouth, Ohio was caused by

Physically speaking, chromium is pretty dull: it's a typical metal: hard, tough, and lustrous, and highly resistant to both

When it comes to chemical reactions, chromium is much more colorful—quite literally: although pure chromium is silvery-white, it forms all kinds of colorful compounds, including chromates and dichromates. Many gems (including chromium garnets, emeralds, rubies, serpentines, and some sapphires) get their colors from the chromium compounds they contain. Many pigments (the color chemicals in

What is chromium used for?

Photo: Lots of chromium ends up in stainless steel, an alloy used for making such things as cutlery and surgical equipment. Stainless steel typically contains 10–30% chromium.

Most chromium is used to make hard, rustproof metallic 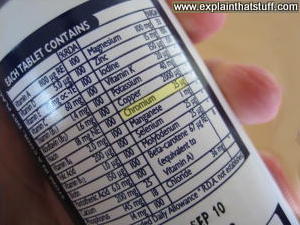 Photo: These vitamin tablets contain "trace" amounts of chromium: around 25 μg (micrograms). To put that in context, they also contain 14 mg (milligrams) of iron—560 times more. Even though the chrome content really is absolutely minute, it's still vital for our health. Found in such foods as grain, potatoes, and fruit, it's used in the body's production of insulin.

Minute (trace) quantities of chromium are essential for a healthy human diet, but some chromium compounds—notably hexavalent chromium, or Cr (VI)—are extremely toxic and carcinogenic (cancer-causing). In the United States, as of 2009, the OSHA (Occupational Safety and Health Administration) limits a worker's exposure of hexavalent chromium to 5 micrograms per cubic meter of air (average exposure over an 8-hour period). 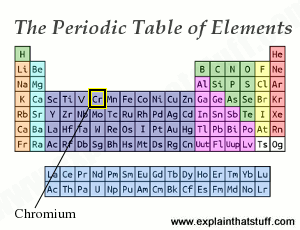 Artwork: The periodic table of chemical elements showing the position of chromium. It's a relatively light element (near the top of the table) among the transition metals, in the same group as molybdenum (Mo) and tungsten (W).