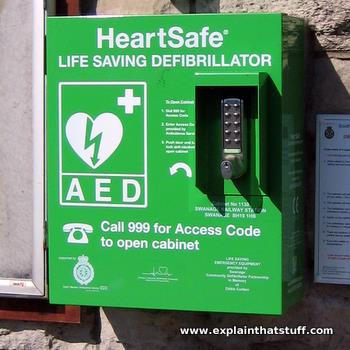 Charging.... five hundred... clear! We've all watched it happen on ER dozens and dozens of times, but it's still relatively uncommon to see the same thing in real life. When someone collapses with a cardiac arrest, their heart can go into a kind of quivering limbo called fibrillation. One of the most effective ways to get it going again is with a sudden powerful

Photo: Ready for action: You can't save a life with a defibrillator if there isn't one around to use. That's why many more of these units are now popping up in public places. This is a wall-mounted unit on a railroad station in England.

Why do we need defibrillators?

Photo: Conventional CPR (heart massage and artificial respiration) can be invaluable, but may not be enough to save a patient without defibrillation. Photo by Suzanne M. Day.

You might not think of yourself as having lots of muscles, but there's one super-powerful muscle in your body you absolutely depend on: the tireless blood

What is a defibrillator?

As the name suggests, defibrillation stops fibrillation, the useless trembling that a person's heart muscles can adopt during a cardiac arrest. Simply speaking, a defibrillator works by using a moderately high voltage (something like 200–1000 volts) to pass an

The kind of defibrillator you see on

In units designed to be used by less-trained people in public places, sticky, self-adhesive electrode pads are often used instead of paddles for safety and simplicity: once the pads are stuck on, the operator can stand well clear of the patient's body and that reduces the risk of their getting an electric shock. 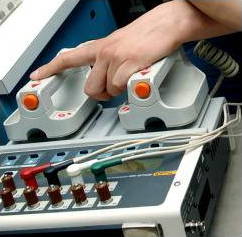 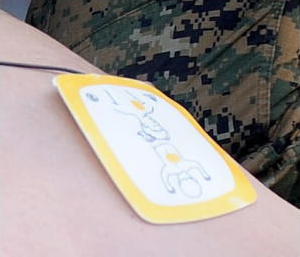 How effective are defibrillators? 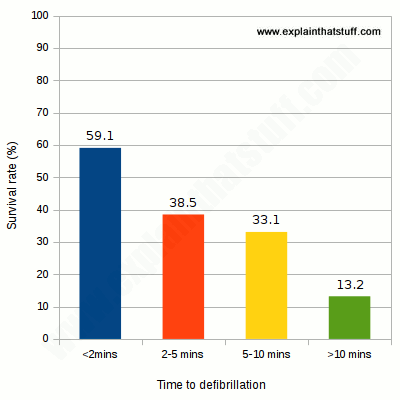 Chart: Why we need more public access defibrillators: the chance of surviving an out-of-hospital cardiac arrest increases the more quickly defibrillation is used. Data from a study of 1732 cases in North Carolina by C.M. Hansen et al, 2015.

You might have noticed that there are lots more defibrillators in public places than there used to be—and there have been calls for them to be as commonplace as fire extinguishers. The reason is simple: if someone collapses with a cardiac arrest, immediate defibrillation, even by an untrained bystander following step-by-step instructions, dramatically increases the chance of survival, compared to delayed defibrillation when the emergency medical services eventually arrive. A 2014 Australian study found the survival rate to be 45 percent compared to 31 percent; very favorable outcomes have also been found in studies in Osaka, Japan, Los Angeles, California, the UK, and elsewhere.

The effectiveness of public defibrillators seems certain to increase now that more areas are encouraging public CPR and AED training in schools and colleges. Over the last decade, a number of US states (including Arizona, Georgia, Nevada, Rhode Island, and Texas) have passed laws encouraging or requiring secondary pupils to receive training of this kind before they leave school. Even so, as a thoughtful 2018 review from Scandinavia points out, it's important to remember that many cardiac arrests take place inside people's homes and in other places where debrillators are not widely available, so their use is still limited.

“Out‐of‐hospital cardiac arrest (OHCA) is a major health problem, accounting for approximately 700,000 annual deaths in the United States and Europe. Early defibrillation is one of the most important determinants of improving survival.” 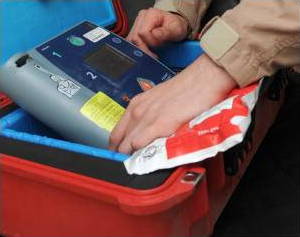 Photo: A portable external defibrillator packed away in an ambulance. Photo by Charles Larkin Sr courtesy of US Air Force.

The units you're likely to see in railroad stations and other public areas are called automated external defibrillators (AEDs) or public access defibrillators (PADs) and they're designed to be used with little or no training. They have self-adhesive electrode pads and a built-in computer that automatically analyzes the patient's heart rhythm to figure out whether a shock will help them (defibrillation doesn't work if the heart has stopped beating altogether) and, if so, what level of shock is appropriate.

The units you see in TV hospitals and ambulances that feature handheld paddles and gel applied to the skin are usually manual external defibrillators. With these devices, the doctors, nurses, or paramedics have to figure out themselves whether defibrillation will help and also what shock voltage or energy level to use. Semi-automated defibrillators can work either automatically or in a manual override mode if the doctor prefers.

Patients who suffer regular problems with their heart rhythm sometimes have an internal defibrillator permanently implanted into their chest (a bit like a pacemaker) or worn on the surface of their skin under their clothes. Units like this constantly monitor the heart rhythm and deliver a shock whenever it's needed. 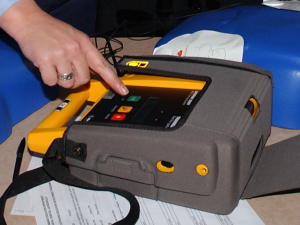 Photo: Modern defibrillators are simple enough for anyone to use. They speak instructions out aloud, telling you exactly what to do. Photo by Susan Cornell courtesy of US Navy.

It's great to invent —to be celebrated as a genius and, if you're lucky, make your fortune! But it's even better when the thing you invent saves lives. Professor Frank Pantridge (1916–2004), a doctor from Northern Ireland, was a life-saving inventor. In the 1960s, he realized that many people were dying unnecessarily because they typically experienced cardiac arrest at home, at work, or in some other public place. By the time they'd been taken to a hospital where there was a defibrillator to kick-start their heart, it was already too late to save them. To solve this problem, Pantridge developed the first "portable," battery-powered defibrillator in 1965. Portable was something of a misnomer since it used huge lead-acid car batteries and weighed about as much as a person (70kg or 154 lb)! Even so, it could be carried around in ambulances, which gave a few valuable extra minutes to save people. Another of Pantridge's important insights was to realize that anyone could use a defibrillator with only very basic instruction; that eventually led to the development of the small, easy-to-use, automated defibrillators (weighing just a couple of kilograms) that are now installed in their millions in public places around the world. Frank Pantridge believed defibrillators should be as commonplace as