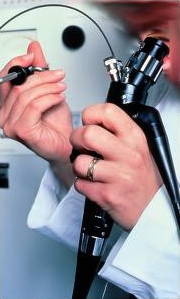 Think back to what medicine was like only a hundred years ago. Suppose you're a 19th-century physician and a patient knocks on your door complaining of acute pains in their abdomen. You can ask them questions and examine their body with your hands. You can prescribe them drugs and watch how they respond over days, weeks, or months. But ultimately, unless you cut their body open and examine it directly, you have no way of knowing with complete confidence what's wrong. So do you take a risk, do nothing, and wait to see how things turn out? Or do you operate immediately, potentially wasting time and money and putting your patient through disruptive and traumatic surgery? Thanks to medical imaging devices such as endoscopes, decisions like this are a thing of the past: physicians can see exactly what's going on inside your body without cutting it open. Let's take a closer look at how they work!

Photo: Endoscopes not only allow physicians to see into your body, they can also be used to carry out delicate, minor surgery. You can see the three key tubes in an endoscope at work here. The big black tube in the middle carries the image of the patient's body into the doctor's eye. The smaller black tube on the right, coming down at an angle, is where light shines into the endoscope from a lamp (not shown) in the operating room. The tube on the upper left at the top (with the silver crown) is where tiny surgical tools can be inserted. The doctor is pressing on a cable that enters the patient's body through this tube to take a tissue sample. Photo by courtesy of National Institutes of Health (NIH).

What is an endoscope?

The optics of an endoscope are similar to those in a telescope. At the remote (distal) end, there's an objective lens, which links to one or more bendy sections of fiber-optic cable (sometimes called relays) that carry the light back out of the patient's body to a second lens in the eyepiece (or to a monitor or

Artwork: An endoscope "clip" like this can be used to stop bleeding during minimally invasive surgery. Clips like this were invented in the 1970s, though they became popular in the mid-1990s with the development of better endoscope tools. Image from Clip device for endoscope and clip for endoscope for use therein by Haruhiko Masuda and Shinetsu Harada, Sumitomo Bakelite Co Ltd, courtesy of US Patent and Trademark Office.

Most modern endoscopes aren't limited to piping light in and out of a patient's body: they can also be used to carry out small surgical operations and other minor, medical procedures. Typically, the remote end of the endoscope can be moved around by turning knobs or pulling on cables, which swivel and bend it from side to side. A secondary tube attached to the main optical cables can be used for sucking out obstructing material (for example, obstacles that block the bronchial tubes in the lungs) or carrying out biopsies (removing small tissue samples for testing) with tiny forceps. Surgeons can also shine powerful, precision

How do endoscopes work? 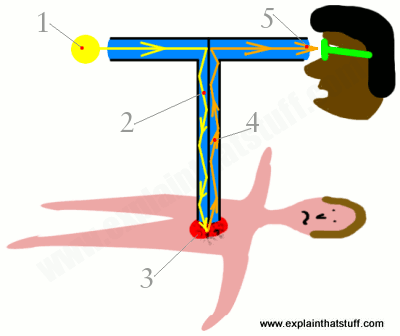 What are the different kinds of endoscopes? 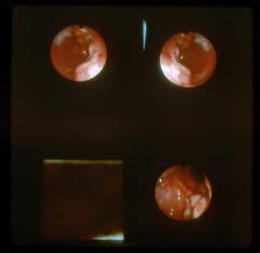 Photo: Images of stomach cancer seen through a gastroscope. Photo by courtesy of National Institutes of Health (NIH) Image Bank.

"Endoscope" is the generic name for an instrument used to look inside any part of the body in this way. Endoscopes used for specific forms of examination have the following names:

Endoscopes aren't just used for medical diagnosis: they're incredibly useful for inspecting inaccessible areas of buildings or parts of machines where people can't easily see. Industrial endoscopes used in this way are called borescopes and fiberscopes.

How are fiber-optic cables different in endoscopes? 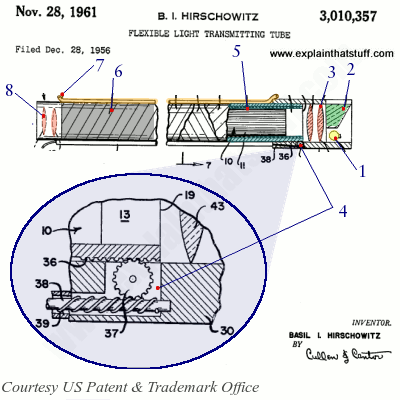 Artwork: The highly flexible fiber-optic gastroscope designed by Hirschowitz et al in the 1950s. The right-hand end is inserted into the patient; the left-hand end is the bit the doctor looks into. Some of the key bits include 1) Light source (interestingly, still positioned inside the patient); 2) Prism; 3) Focusing lenses; 4) Gear-driven focusing mechanism (shown in more detail in the pullout illustration); 5) Optical fibers surrounded by protective waterproof and air-proof membrane; 6) Metal shell that transmits forces down the tube, allowing it to be manipulated along its entire length by twisting and turning; 7) Air tube allows the body cavity to be inflated; 8) Eyepiece lenses. Original artwork courtesy of US Patent and Trademark Office (with colors and new numbering added for explanatory purposes). For more details, please see US Patent 3,010,357: Flexible light-transmitting tube.

Attempts to see inside the body with crude endoscopes go back to the late 19th century; the earliest US patent I've found using the term is dated 1911. These early medical endoscopes were crude and bulky by modern standards, because they placed the light source itself inside the body cavity that needed to be examined. Typically, that meant using tiny bulbs, which produced little light and burned out quite quickly (because they had to be turned up so brightly). They also produced quite a lot of heat, which meant they risked burning or drying out the body tissue under examination. In the early 1950s, Max Fourestier and colleagues at the Centre National de la Recherche Scientifique in Paris, France developed an endoscope using rods made of quartz or Plexiglas, which enabled light from a source outside the patient's body to be shone down inside a body cavity. It was an important breakthrough—and a major stepping stone to the fiber-optic endoscope.

The basic technology behind the modern endoscope was developed in the early 1950s by English physicist Harold Hopkins (1918–1994) and his Indian-born student Narinder Kapany (1927–), who'd been asked for help by a group of surgeons. After a great deal of research, Hopkins and Kapany developed a way of making flexible pieces of glass that became known as optical fibers—thicker versions of modern

By the mid-1950s, three University of Michigan scientists (Basil Hirschowitz, Lawrence Curtiss, and C. Wilbur Peters) had used optical-fiber technology (which they neatly defined as "long, thin, highly flexible, rope-like tube for use in transmitting light") to build an instrument called a gastroscope that could be used to see inside a patient's stomach. The same technology was later used to study other body cavities.

Pill cam: the endoscope of the future? 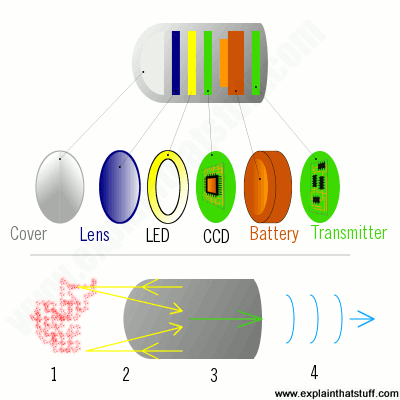 Endoscopes are brilliant inventions, but no-one really enjoys having a camera tube stuffed inside them!

What's the alternative? In the future, doctors hope to shrink endoscopes to the size of a tiny pill you can swallow. Inside the pill, a miniature camera will pick up images of your insides and a radio transmitter will beam them out to a monitor nearby.

The top part of the artwork shows how much technology is packed in a pill-cam. Does it sound impossible? Not really! LEDs are smaller than pills and have lenses built into them. CCDs are not much thinner than a piece of card. Watch and calculator batteries are pretty tiny too. And even complex electronic circuits can be made very small and thin. So the whole thing sounds feasible.

And here's how it works:

For much more technical detail, take a look at these three key patents: