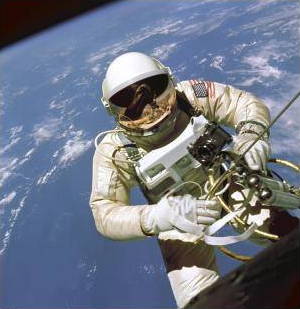 There aren't many things that everyone in the world can agree on—but there's one thing virtually everyone would admit: gold is valuable. People have been making precious articles from gold for over 5000 years and even now gold bars remain the bedrock of the world's financial system. You only have to look at a piece of gold or feel how heavy it is to understand its enduring appeal. Even the name "gold" conveys something of the value we've come to attach to this precious metal: it comes from an Indo-European word ghel meaning to "gleam" or "shine." Where does this amazing substance come from and what makes it so special?

Photo: Gold in space: Ed White became the first astronaut to step into space and simply "let go" in 1965. He's attached to his spacecraft by a gold-wrapped umbilical line and his face is protected from the Sun's harmful rays by a gold-coated visor. Photo courtesy of NASA on the Commons. 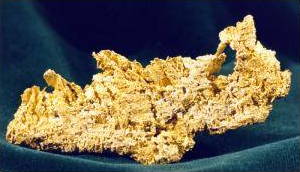 Photo: A sample of pure gold from Francomb Hill, Summit County, Colorado, United States. Photo originally by US Bureau of Mines courtesy of US Geological Survey.

Gold is a soft yellow

The gold we use from day to day often needs to be much harder than this to survive rough treatment. Typically, we mix gold with another metal to make a substance called a gold

One reason gold is so valuable is that it's chemically very unreactive. Air,

Where does gold come from? 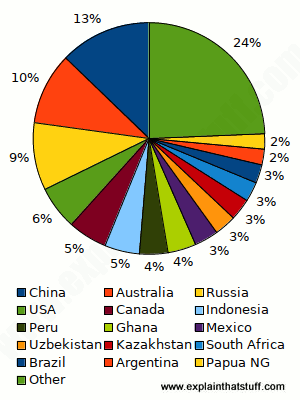 As prospectors throughout history will tell you, gold isn't that easy to discover: although you can find it in many different countries in all kinds of rocks and soils, it's only the 75th most common chemical element in Earth's crust. Given that there are only 90 or so natural elements, that's another way of saying gold is pretty rare. Since gold is so unreactive, it's possible (but unusual) to find pure gold in mineral deposits; typically most gold is combined with other elements in alloys such as electum (a mixture of gold and

How do we get gold out of the ground?

If you've ever watched movies about the Californian gold rush, you'll have seen grizzly looking prospectors panning for gold from placer deposits in streams. Panning means using a shallow pan to wash away sand and gravel until heavier nuggets of gold remain. Modern gold mining is far more sophisticated and happens on a much bigger scale. 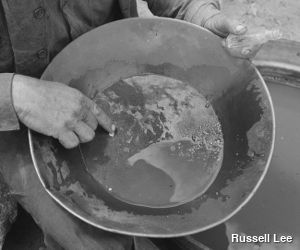 Photo: Panning for gold. Fill your pan with sediment from your local creek, carefully wash out the dirt, keep rocking it back and forth and swirling in a circular motion, and eventually, you might end up with a tiny amount of gold (among the other things) if you're very lucky! Photo by Russell Lee, Office of War Administration, courtesy of US Library of Congress.

Placer deposits are mined using a scaled-up version of panning. Huge mechanical excavators and dredges pull out vast amounts of material from the bed of a 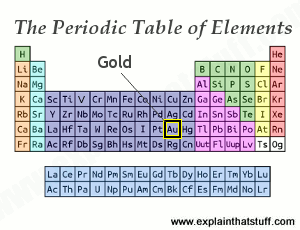 Artwork: The periodic table of elements showing the position of gold (Au). With 79 protons, it's quite low down the table, which explains why it's so heavy (lead, symbol Pb, a very heavy metal, is just three positions to the right). Silver is the element directly above gold, which is why it's the lighter of the two. Silver, gold, and copper are all good conductors of electricity and sit in the same group (column) of the table.

What do we use gold for? 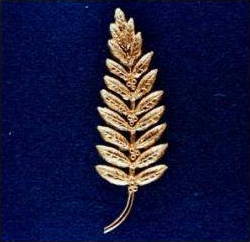 Photo: A gold olive branch (a traditional symbol of peace) left on the Moon by Neil Armstrong and the Apollo 11 space mission. Photo courtesy of NASA on the Commons. 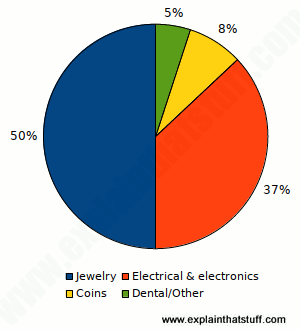 Where does all the gold go? Jewelry is still the biggest use for gold, though much of the metal finds its way into electrical and electronic equipment. Estimated percentages for end uses of gold in the United States, 2019. Source: US Geological Survey: Mineral Commodity Summaries: Gold, January 2020.

The majority of gold is still used for making jewelry, decorative items (often coated in gold leaf or