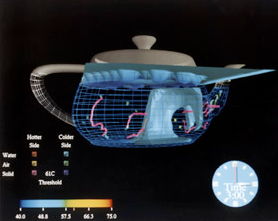 Is it going to rain tomorrow? How will

Photo: Computer models are useful for studying things we can't easily visualize in any other way. This is a

What is a model?

Have you noticed how children love playing with models? From dolls houses and cuddly dogs to model 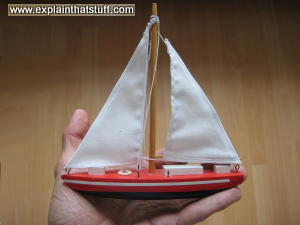 Photo: A physical model. This is a little wooden model of a real-life sailboat, but you can see that it's hugely simplified. In theory, you could put it in the bathtub and use it to study

How is a mathematical model different?

Why use a computer for mathematical modeling? 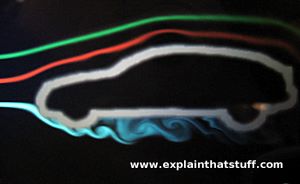 Photo: Computer modeling a wind tunnel test: Building realistic models of new cars to test their aerodynamics is expensive and time consuming, so a lot of this kind of work is now done with computer models. You can even try your hand at it yourself by downloading a wind tunnel modeling app for your smartphone, like this one. It's a great educational exercise for physics students.

You don't necessarily need a

A model of something like the weather involves hundreds, thousands, or even millions of different variables linked together by much more complex equations. There are so many variables and so many equations that it would take forever to solve them by hand. When pioneering mathematical modeler Lewis Fry Richardson made one of the world's first detailed weather forecasts this way in the 1920s, using just seven equations, it took him and his wife something like six weeks to figure out a single day's weather! That's why, in practice,

How do you build a computer model?

The first step in building a model is to decide which variables it should include and figure out the equations that connect them together. This involves making a number of assumptions and simplifications. Going back to our model of height at age 20, you can see we made two notable assumptions: first, that we'd keep growing at all and second that we'd do so at a steady rate between 10 and 20. What if we'd stopped growing at 11 or grown much more rapidly at ages 14 and 15? We could have allowed for that with a more complex equation if we'd wanted to. Another thing we didn't consider was whether our model ceased to be valid at all after a certain age (do the numbers and you'll find it predicts we'll be 3.5m or ˜11.5 ft tall at the age of 50 and 6m or ˜20ft tall if we reach 100). There were all kinds of things we might have considered or incorporated into our height model—but we glossed over them to keep the problem simple to understand and easy to solve.

Models are always (by definition) simplified versions of real life and, where mathematical models are concerned, there are good reasons for this. If really complex problems (such as weather forecasting and 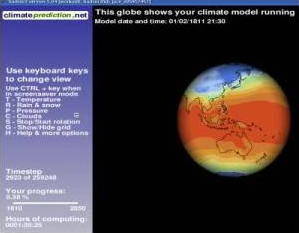 Photo: Climate models are based on millions of precise measurements of the weather made all over the world during the last few decades. My computer produced this computer model of the climate as part of Climateprediction.net, in which ordinary computer users help scientists study global warming. Over 47,000 computers in the world are helping to "number crunch" climate data for the project.

Once the model is built, it has to be loaded up with data; in the case of a climate model, that means real-world measurements of the different variables, such as temperature, rainfall, and pressure measurements from around the world going back years or decades. Once that's done, it's possible to verify and validate the model. Verifying a model means running it to see whether it makes reasonable predictions. So if you build a model for weather forecasting and it tells you the temperature in Beijing next week is going to be 5000 degrees, you know you've gone wrong somewhere. Validating a model is a different process that involves running a model to produce results you can check against existing data. So if you build a model of the world's weather using measurements taken during every year of the 20th century (from 1900 to 1999), you might run it forward to the years 2002, 2003, and 2004 (say) to see what predictions it makes. You could compare those predictions with actual measurements made during those years and, if there's good agreement, take that as a validation of the model.

With the model successfully built, verified, and validated, the next step is to use it to make some actual predictions. A weather forecasting model could be used to predict how much rain will fall in Toronto or Berlin for a week or two in advance; a climate model (similar in many ways and based on the same data) would be making far less detailed predictions much further into the future.

What else are computer models used for?

Modeling the weather and climate aren't the only things you can do with computer modeling. Models are used in all kinds of fields from science and engineering to medicine and economics. A model of a newly designed

Why use computer models?

This illustrates perhaps the most important advantage of computer modeling: it gives us the ability to ask "what if?" questions about complex aspects of the world we can't easily test in reality. You can't build 100 different designs of skyscraper to see which is most likely to survive an 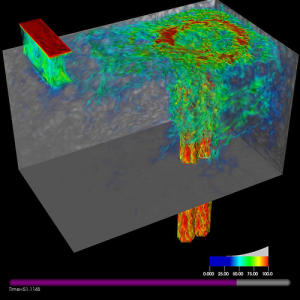 Photo: Computer models make difficult and dangerous things easy to study safely. This is a model of the fluid flow inside a nuclear reactor. Photo courtesy of Argonne National Laboratory published on Flickr in 2009 under a Creative Commons Licence.

Modeling also saves time and money. Auto manufacturers routinely test the safety of their cars by wrecking prototypes (test versions) with crash-test dummies inside them, but it saves a great deal of time and money to do a lot of pre-testing with computer models beforehand. Computer models make it possible to run many more tests and cars are safer as a result. Computer models are increasingly being used to predict natural disasters, such as hurricanes, earthquakes, and tsunamis. If weather forecasters can accurately predict which tropical storms will become hurricanes, and how they will behave when they hit land, they can warn people of danger in good time, helping to reduce damage to property and potentially save lives.

Next time you fool around with a model, bear this in mind: you're not playing, your carrying out serious scientific research!

Here's a brief list of some key moments in modeling: