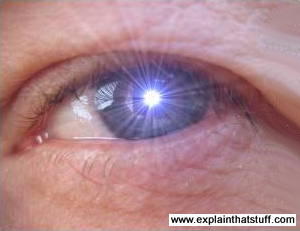 Don't stare at the Sun! It's something we all learn at a very early age: everyone knows it can blind you. So what's the deal with laser eye surgery (or LASIK/LASEK, as it's properly called)? If looking at the Sun is harmful, how can staring into a blindingly bright

Photo: LASIK/LASEK surgery may be able to improve your vision, but it's not suitable for everyone—and you need to be aware of the risks. Please note that this is an artistic representation of laser surgery, not an actual illustration of what's involved. 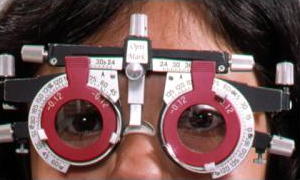 Photo: Having eyeglasses can be very tedious. Fortunately, the ones you end up with are generally much more comfortable than the adjustable ones you get in opticians! Photo by courtesy of National Eye Institute, National Institutes of Health.

If you've worn eyeglasses or contact lenses for years, laser eye surgery can seem a very attractive option. Just imagine being able to see clearly without those clumsy optical attachments stuck in front of your eyes! The first to understand is how the surgery does away with the need for those things.

The reason you need extra

When you wear eyeglasses or contact lenses, the extra bit of 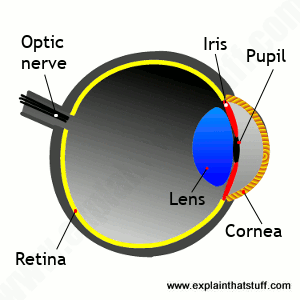 Artwork: Eye anatomy: the main parts of the human eye. The cornea at the front is the bit we're interested in when it comes to laser eye surgery.

What is laser eye surgery?

Now in theory, if we could operate on people's eyes to change the shape of their lenses, we could correct eye problems like this very easily. The trouble is, the lens is not on the outside of the eye: it's not easily accessible to an eye surgeon. Why not? Well, in front of the lens there's a thin, transparent protective coating called the cornea that you'd have to remove first. But here's a bit of luck. Since the cornea is curved, and not made of air, it also has an effect on light rays. In other words, it too behaves like a mild lens at the front of your eye. So the theory behind laser eye surgery is to change the shape of the cornea, very slightly, to compensate for problems in the lens behind it.

The medical prefix for anything to do with the cornea is kerato; keratitis, for example, is the name given to an inflammation of the cornea, having surgery to remove part of your cornea is called a keratectomy, and reshaping your cornea is keratomileusis. So now you can see where surgeons got the name LASIK from: it stands for Laser-Assisted In-Situ Keratomileusis. In other words, using a laser to reshape your cornea. The alternative procedure called LASEK stands for Laser-Assisted Subepithelial Keratectomy. Gulp. So what do these horrible-sounding things actually mean? 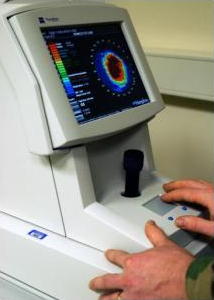 Photo: Corneal topography: Some time before you have laser eye surgery, you'll have an eye examination to establish how much treatment your corneas need. During that session, a computerized machine like this will make a map of your cornea so the surgeon can figure out which parts of the tissue need to be removed. Photo by Tony Tolley courtesy of RAF Lakenheath, US Air Force, and Defense Imagery.

What does it involve in practice?

Newspaper and magazine advertisements paint a seductive picture of laser eye surgery as a simple walk-in procedure: walk-in with glasses like the bottoms of wine bottles; walk-out with 20–20 vision. This is really quite a misrepresentation. First, laser surgery isn't suitable for everyone and absolutely doesn't guarantee perfect vision. Second, it's far from such a simple procedure: it typically involves a lengthy period of preparation before the laser operation and an even longer period of recovery lasting six months or more after the operation is done. Before the surgery, for example, you have to stop wearing contact lenses and eye makeup. If you wear hard lenses, you have to cease wearing them for weeks or even months before the surgery can take place (the exact period depending on how long you've been using them). 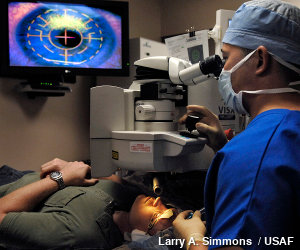 Photo: An eye surgeon carries out LASIK surgery. Photo by Larry A. Simmons courtesy of US Air Force.

The operation itself is relatively simple and it's easy to understand. First, your eye is treated with an anesthetic, then your eyelids are gripped and held open by a suction frame. The same device pulls on the cornea and holds it securely in place ready for the surgery. It's not exactly painful, though it's not comfortable either. Next, using tiny bursts of powerful light lasting no more than a few nanoseconds, the laser cuts a flap in your cornea. (In some procedures, the flap is cut by a microscopic knife called a microkeratome blade.) Think of the flap as a bit like a small door in the surface of the cornea: it's cut on three sides but the fourth side is left attached to form a kind of hinge. The flap is then lifted up and folded back on the hinge to expose the inner corneal tissue underneath. Under computer control, the laser then reshapes the cornea under the flap. Once that's done, the flap is replaced and it will slowly reattach itself without any need for stitches or surgical adhesives.

That's pretty much it—although you can't expect an instant improvement in your vision. First, you have to recover from the operation itself. You have to take antibiotics and other eyedrops to prevent infections and a syndrome called "dry eye." You also have to rest more and sleep with an eyeguard for several weeks to prevent damage while your eye recovers. You're not allowed to wear eye make-up, for the first few days, or take part in strenuous sports, for the first few weeks.

LASEK evolved from an earlier kind of laser treatment called photorefractive keratectomy (PRK), but is considered less painful. In simple terms, LASEK is a more superficial and less drastic treatment than LASIK; technically, it's referred to as a "surface ablation procedure," which involves removing some of the epithelium (surface cells) of the cornea. For that reason, it's generally considered safer than LASIK and less prone to complications. However, views differ on whether LASEK or LASIK is the better treatment and there is still no definitive answer. For example, a 2017 Cochrane review of numerous published studies concluded only that "there is uncertainty in how LASEK compares with LASIK in achieving better refractive and visual results in mildly to moderately myopic participants."

Is laser surgery a good idea?

Since laser eye surgery became available in the early 1990s, millions of people have benefited from a permanent improvement in their vision. Although few long-term studies have been done, over 90 percent of people who've had laser surgery reputedly achieve perfect or much-improved vision. Not surprisingly, a similar percentage of patients say they're satisfied with the results of their operation. Even so, laser eye surgery is by no means a miracle cure for bad eyesight, as government health agencies and consumer groups around the world have been at pains to point out. If you're considering having this treatment, be sure you're properly informed about everything it entails and make sure you have realistic expectations. 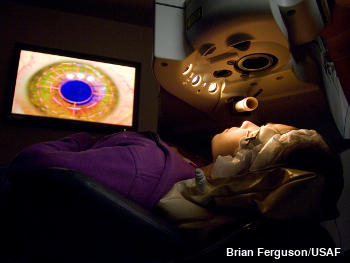 Photo: Laser surgery is a meticulous medical procedure; even so, there are risks and potential side-effects—and you won't be saying goodbye to eye charts forever: it's important to have your eyes examined regularly even after treatment. Photo by Brian Ferguson courtesy of US Air Force.

The first thing to note is that laser treatment is not suitable for everyone. While it may suit people with relatively mild short sight, for example, it's less suitable for those with very poor vision and it cannot address the gradual deterioration in close-up vision (presbyopia) that most people experience when they get older. A significant proportion of patients need a second operation called a retreatment, so you should be prepared for that possibility. It's also important to realize that the recovery from laser-surgery can be uncomfortable and protracted. Some people experience uncomfortable or painful side-effects for months after their operation (you'll often hear about a common phenomenon called "dry eyes") and complications such as dislocated ("slipped") or folded flaps. A small number report that the operation has made their vision worse—and there have been numerous claims for damages (search for "LASIK legal claims" and you'll find lots of eager lawyers ready to sue for medical negligence). Having said that, lots of people will tell you that having laser eye surgery was the best thing they ever did.

The key messages are these: