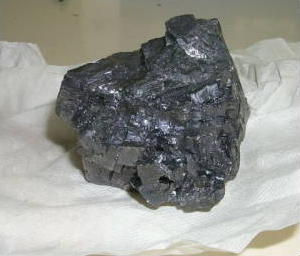 As heavy as lead—it's probably something you say all the time and, if you've ever tried to lift a car

Photo: A sample of galena (lead sulfide), by far the most important lead ore. Photo by courtesy of US Geological Survey.

Where does lead come from?

“Lead poisoning is a classic example of what happens when we take a material that was once buried deep underground and with which humans rarely had contact and introduce it widely into humans' ecology.”

Lead is reasonably widespread (about the 36th most common element in Earth's rocky crust) but, like most other 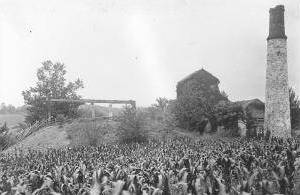 Photo: The Old Wheatly lead mine, near Phoenixville. Chester County, Pennsylvania. Photo by Geological Society of America courtesy of US Geological Survey.

Galena is turned into pure lead metal through a multi-stage process. First it is crushed and washed to remove dirt and impurities. Then the lead is extracted either by smelting (heating in a furnace with coke) or in a two-stage process involving first roasting to convert lead sulfide into lead oxide, then smelting to remove the oxygen. Other precious metals are usually mixed in with the galena ore (including

Many countries mine lead, with leading producers including China (responsible for half of all mining), Australia, Peru, Mexico, and India. Although the United States once mined about a third of all the world's lead, by 2018 it was mining only around 7 percent. Most US mined lead comes from Alaska and Missouri, with the rest coming from Idaho and Washington. About 60 percent of lead used in the US is produced from "secondary" (recycled) sources. 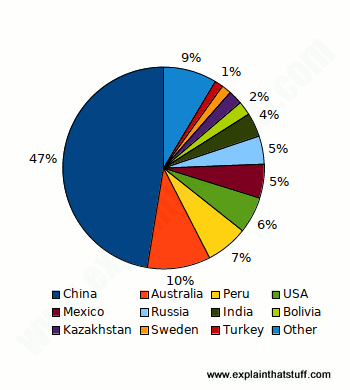 Chart: Who produces the world's lead? About half of it comes from China. Chart shows world mine production for 2018. Source: US Geological Survey, Mineral Commodity Summaries, February 2019.

Lead is a soft, heavy, blueish gray metal that lives in group 14 (formerly IVa) of the Periodic Table of chemical elements.

On the face of it, when it comes to metallic properties, lead doesn't put up much of a showing. It's soft, weak, a poor conductor of 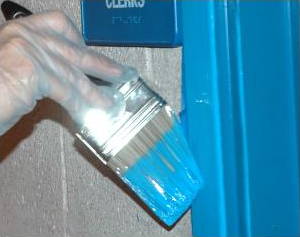 Photo: Health and safety concerns mean lead is no longer so widely used in paints. Photo by Brian M. Brooks courtesy of US Navy.

Lead has a valency (combining power) of either +2 or +4, joining with a variety of other elements to make useful lead (II) and lead (IV) compounds, including oxides, sulfates, and carbonates. Industrially, the most important lead compound is a yellow powder called litharge (lead (II) oxide or lead monoxide), which is a vital ingredient in all kinds of

What do we use lead for? 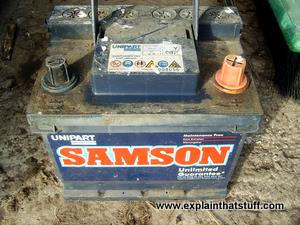 Consider lead's useful properties and you can more or less predict what people will use it for: 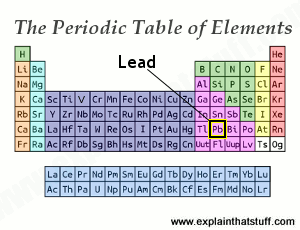 Artwork: The periodic table of the chemical elements showing the position of lead (Pb). It's quite low down in the table because atoms of lead contain lots of protons and neutrons; that explains why lead is so dense and heavy.