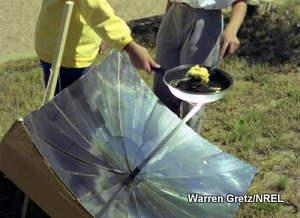 Next time you zap your dinner in the

Photo: Cooking eggs for free—with a solar reflector. The dish focuses the Sun's rays on the frying pan! Photo by Warren Gretz courtesy of US DOE/NREL (US Department of Energy/National Renewable Energy Laboratory).

What is a solar cooker?

Have you ever tried that old camping trick with a magnifying glass to burn a hole in paper? What you're doing is using a

Solar cookers work in a similar way to camp-fire magnifying glasses, but instead of lenses (which are relatively heavy and expensive) they use cheap

There are three main types of solar cookers, though since many are self-built or modified using locally available materials, there are literally hundreds of variations.

These are the most common kind of solar cooker. They're sturdy wooden boxes lined with heat-reflective 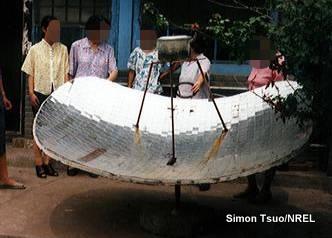 Photo: Chinese people boil water using a kettle placed at the focus of a parabolic reflector. Photo by Simon Tsuo courtesy of US DOE/NREL (US Department of Energy/National Renewable Energy Laboratory). 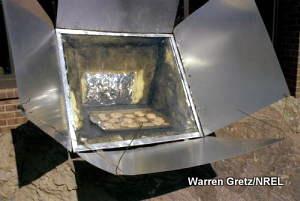 Photo: This panel cooker mixes elements of box cooker and reflector: the panels collect heat that builds up inside the box. Photo by Warren Gretz courtesy of US DOE/NREL (US Department of Energy/National Renewable Energy Laboratory).

These are like a cross-between box cookers and parabolic reflectors. Using a number of flat reflectors hinged together, you enclose an area and stand your cooking pot (covered with a sealed plastic bag) in the middle of it. Panel reflectors can be made simply and cheaply (for just a few dollars) from cardboard and

What are the advantages and disadvantages of solar cookers?

Solar cookers can save the world's poorest people the expense of buying wood fuel or the time-consuming chore of collecting it. (It's often women who gather firewood in difficult or dangerous conditions, while children who have to walk for hours to collect wood or water have less time for school or helping their families in other ways.) Solar cookers also bring health benefits. Cooking on blazing fires can be dangerous and unpleasant and often causes respiratory problems, while solar cookers are safer (they use no fire) and are entirely smoke-free. Solar cookers can be better for people's health in other ways. Food cooked more slowly is more nutritious, and solar cookers can be used to

There are a few drawbacks, however. Solar cookers obviously rely on sunlight so they can be used only at certain times of day in good weather, and not necessarily when people want or need to cook. The food also has to be cut up small so it will fit in a pot, and since solar cookers don't provide the warmth, heat, and community focal point that a fire may give, using them can involve a certain amount of cultural adjustment. These may or may not be minor details for people who've always cooked on open fires and whose home lives revolve around them. Then again, using a solar cooker isn't obligatory; the most important point is that it provides an alternative that wasn't there before. 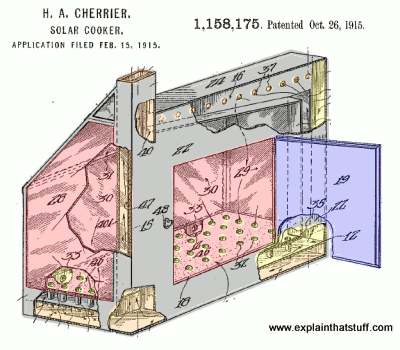 Artwork: Harry Cherrier's "fan-assisted" solar cooker from 1915. Like a conventional solar oven, it cooks using sunlight, but the cooking process is speeded up by air drawn into the cooker, heated by the outer casing, passed through the central cooking chamber, then back out again through a flue. From US Patent 1,158,175: Solar cooker by Harry Cherrier, artwork courtesy of US Patent and Trademark Office.

Solar cooking is one of those things that no-one can really claim to have invented; doubtless people in tropical countries have been cooking with sunlight for as long as they've been cooking! Having said that, European scientist and alpine explorer Horace-Bénédict de Saussure (1740–1799) is generally credited as the inventor of the modern, box-type of solar cooker.

In more recent times, the earliest US patent I've found for a solar cooker was filed by Harry Cherrier of Redlands, California in February 1915 and granted in October the same year. Cherrier explains how his invention "will utilize the sun's rays for cooking purposes" in preparing dried fruits, vegetables, "jellies, jams, etc." in such a way that they are "much superior" to those cooked the usual way. Unlike many modern solar cookers, Cherrier's invention speeds up the cooking process by sucking in a steady draft of air, heating it up, and passing it through—so it's a little bit like a modern, fan-assisted oven: "To properly prepare such material it is necessary that the air supply be continuous, abundant, and hot so that the moisture in the material to be cooked is absorbed by the air and rapidly taken away."

You can explore many more designs for solar cookers with a quick search for "solar oven patents" at the US Patent and Trademark Office (or on Google Patents).

Life in other countries

These accounts of life in developing countries explain the risks of cooking with firewood, especially for women and children: