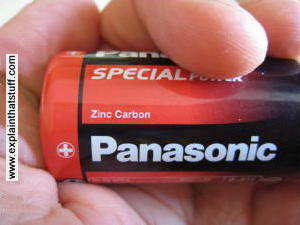 Need to stop a shed roof going rusty? Want to shake off a niggling cold? Afraid of getting sunburned? Looking for a handy way of storing 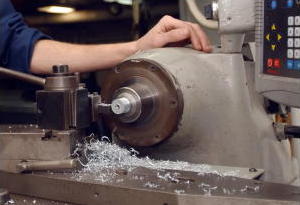 Photo: Zinc in its solid form being worked on a lathe. Photo by William Weinert courtesy of US Navy.

A reasonably shiny, blueish-white metal, zinc is one of the 92 naturally occurring chemical elements—the 24th most common in Earth's crust. "Common" is not quite what you might think, however: dig out a tonne of Earth and you'll find it contains a measly 65 grams (2.3 oz) of zinc! 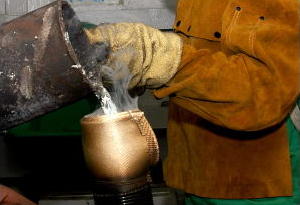 Photo: Zinc in its liquid form. It might look like hot water pouring from a kettle, but it's actually molten zinc at the horribly high temperature of 524°C (975°F)—over five times the temperature of boiling water! Zinc is a solid at room temperature but melts into a liquid above 420°C (787°F). Photo by Janice Kreischer courtesy of US Navy.

Like most other metals, zinc doesn't occur in its pure form in nature but combined with other elements in minerals such as zinc oxide, zinc silicate, and zinc carbonate. It's the usual story! If you want the pure zinc, you need to take huge truckloads of a raw, zinc-containing mineral and put it through a multi-stage refining process (involving several separate physical and chemical steps) to remove the other elements. 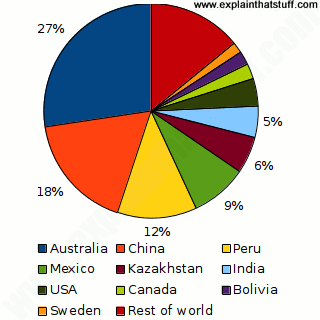 Starting out with zinc sulfide, for example, you grind it up into a powder, wash it to get rid of the sulfides of other metals that are usually mixed in, and eventually you end up with zinc oxide (ZnO). You leach this (react it with sulfuric acid) to get a solution of zinc sulfate in water. Then you use

If someone shows you a piece of zinc, it will probably look dull grayish-white. But what you're looking at will be zinc oxide, which forms when zinc reacts with oxygen in moist air; pure zinc is actually a shiny, blueish, whiteish, silverish sort of a color. Zinc isn't like 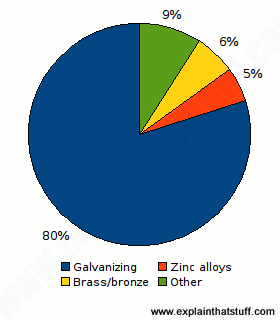 Pie chart: Uses of zinc: Most zinc is used in galvanization, with the rest used for zinc-base alloys, brass, and bronze. Source: U.S. Geological Survey, Mineral Commodity Summaries: Zinc, January 2016. (Newer figures were not published in the 2017 and 2018 summaries.) 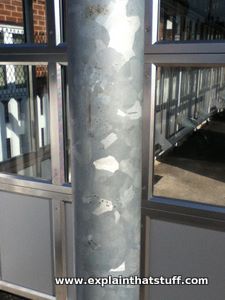 Photo: This steel lamp-post has been protected from corrosion by coating it with a zinc compound, through a process called hot-dip galvanization. It's easy to recognize steel treated this way from the large crystal pattern on its surface, which is known as spangle.

Most zinc is used in galvanization. Galvanizing is a process based on electrolysis that involves covering 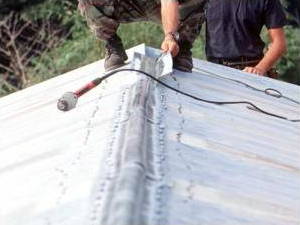 Perhaps surprisingly, the zinc that stops your water tank going rusty is also—even as you're reading this—helping your body to stay healthy. You may have noticed that all kinds of cough and cold remedies contain zinc, as do vitamin tablets and supplements (and many breakfast cereals). Zinc deficiency is linked with many different health problems and illnesses, but doesn't really affect people in affluent nations, such as the United States, where most enjoy a good diet; it's much more of a problem in developing countries. 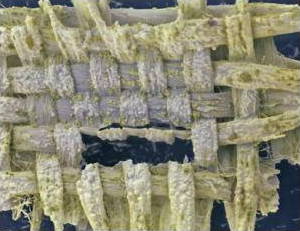 Photo: Zinc oxide fabric has a variety of useful properties, offering resistance to

How was zinc discovered?

No-one knows exactly who first discovered zinc or put it to use, but archeologists have discovered zinc-based alloys in sites dating from prehistoric times. We also know that the Romans (whose empire flourished in Europe from 27BCE to 395 CE) made brass coins from copper and zinc, although they didn't recognize or identify zinc as a pure metal. Another millennium passed before people began to use zinc as a metal by itself. Historians think this first happened in India in the 13th century; about 300 years later, the Chinese were producing zinc on a large scale. The modern age of zinc began in the mid-18th century and two Europeans share the credit. In 1737, English metallurgist William Champion (1709–1789) developed and patented the process of making pure zinc by smelting calamine (zinc oxide and iron oxide) with charcoal on a huge, industrial scale. Zinc was finally recognized as an element in 1746, thanks to the efforts of a German chemist named Andreas Sigismund Marggraf (1709–82), who used similar techniques to Champion to study zinc in detail in his laboratory. 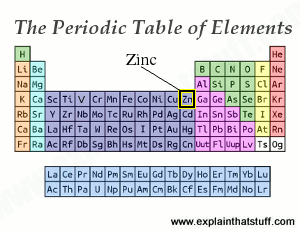 Artwork: The periodic table of the elements showing zinc (among the transition elements). Note how zinc (Zn) is right next to copper (Cu)? That means the two atoms are of very similar size, which is why zinc atoms can easily replace copper atoms to make the extremely useful