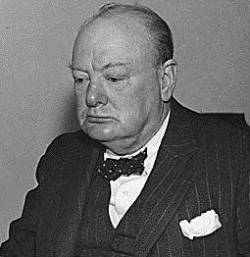 Was Winston Churchill an Alcoholic?

"You, Mr Churchill, are drunk."

"And you, Lady Astor, are ugly. But I shall be sober in the morning."

This infamous exchange was the incident that confirmed Winston Churchill's reputation as a heavy drinker. It all started back in 1899. Churchill, aged 25, was a correspondent on the Morning Post, covering the Boer war. Sent out to the front line, he took with him 36 bottles of wine, 18 bottles of ten-year old scotch, and 6 bottles of vintage brandy (a drink he believed was essential to a staple diet). Clearly Churchill had better access to alcohol than most people on the South African front: his stores were said to contain "many bottles of whiskey, claret, and port." 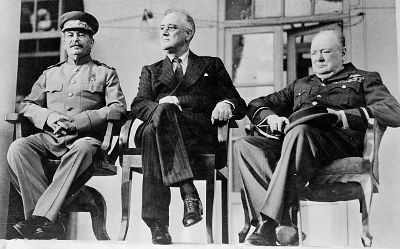 Photo: Driven to drink? Imagine the stress Churchill faced as the British leader during World War II. Pictured here with Franklin D. Roosevelt (middle) and Joseph Stalin (left) in 1943. Photo courtesy of US Library of Congress.

Over the next few decades, Churchill's name came to be linked with two things: drink and war. They were often closely connected. In 1915, many people considered England's future leader exceptionally brave when he opted for the front line; as an aristocrat, he could have chosen a safe post at headquarters. But as a close friend pointed out: "Hard liquor was prohibited at Battalion HQ… and only sweet tea provided, a beverage by no means to Winston's taste."

Churchill could never have given up drink; that much was confirmed by another wartime episode. When George V set a personal example to the troops by giving up alcohol, Churchill declared the whole idea absurd and announced he would not be giving up drink just because the King had. 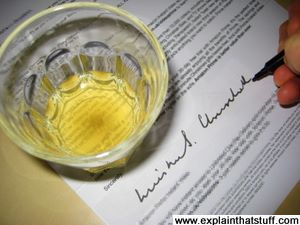 Photo: Drink loomed large over Winston Churchill's life—but how did it affect his leadership? (Simulated image.)

Even as Prime Minister, Churchill refused to moderate his drinking. He believed Europeans liked leaders who could hold their liquor, so he did nothing to discourage rumors about his alcoholic excess. Churchill admitted he relied on alcohol. He always had a glass of whiskey by him, and he drank brandy and champagne both at lunchtime and dinner.

Only when Churchill reached the age of 76, in 1953, were there signs of change: "I am trying to cut down on alcohol. I have knocked off brandy and take Cointreau instead. I disliked whiskey at first. It was only when I was a subaltern in India,and there was a choice between dirty water and dirty water with some whiskey in it, that I got to like it. I have always, since that time, made a point of keeping in practice."

Some believe Churchill's heavy drinking caused his decline as Prime Minister. As Lord Moran commented: "It makes his speech more difficult to understand and fuddles what is left of his wits; and yet he does not attempt to control his thirst." When the subject was raised with Churchill, he replied enigmatically: "Is alcohol a food?"

"Never the worst for drink"

In the 10 years of retirement before he died, Churchill drank more than ever. He never missed having a bottle of champagne for lunch and very often had another one for dinner. One visitor from the period noted: "There is always some alcohol in his blood, and it reaches its peak late in the evening after he has had two or three scotches, several glasses of champagne, at least two brandies, and a highball… but his family never sees him the worst for drink."

That was the most remarkable thing about Churchill: he always seemed perfectly sober. Raised as an aristocrat, he believed drunkenness to be contemptible and disgusting, and a fault in which no gentleman indulged.

But was Churchill an alcoholic? He drank so much for so long that, in the end, no-one could really tell.

Sometimes we don't notice how much we're drinking...

Churchill was a prime example. No limit is safe for everyone, different drinks contain very different amounts of alcohol, and the recommended weekly intake varies around the world; some countries quote different limits for men and women to take account of different body weights, biological differences, and other risk factors. During pregnancy, or while you're trying to become pregnant, you are recommended not to drink at all to minimize risks to your baby. For the best advice, tailored to where you live, consult official government/health websites, such as Rethinking Drinking (USA), NHS and Drink Aware (UK), and CCSA (Canada).

But how you drink is more important than how much. Drink with meals and with company. Don't get caught buying rounds – you can end up drinking six pints when two would do. And if you plan a long drinking session, make every other drink a non-alcoholic one. That way, as Churchill once said, you will "take more out of alcohol than alcohol takes out of you."

Alcoholism: Some shocking facts and statistics 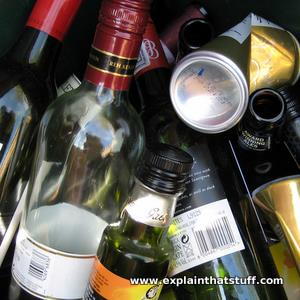 You might find it amazing—or perhaps even slightly amusing—that one of the greatest leaders in history lived his life under the influence of alcohol. Churchill was lucky: alcohol didn't destroy him or the lives of the people around him; doubtless, on occasions, it helped him to cope with the incredible pressures he faced. Many other people aren't so fortunate: alcohol frequently turns them into abusive, violent monsters, tears apart their families and drives away their friends, before killing them, slowly and painfully, with a toxic cocktail of horrible diseases. Perhaps even more wretchedly, some alcoholics become drink drivers who kill, maim, and blight the lives of unlucky people they don't even know.

The statistics on alcohol abuse are shocking: